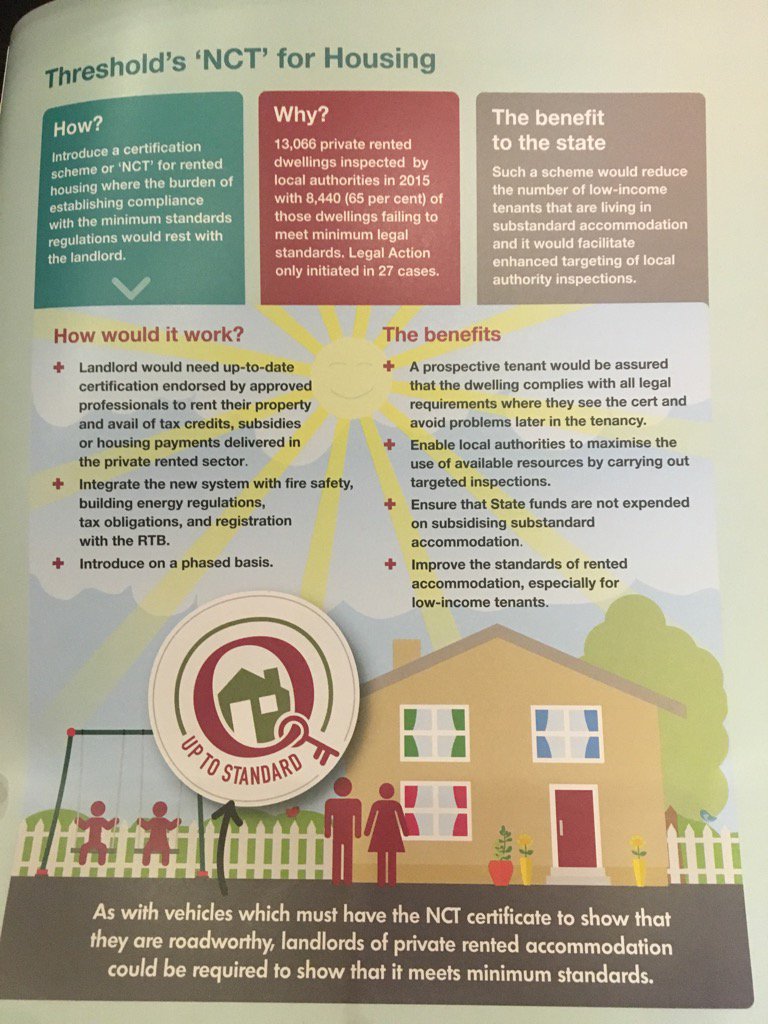 The national housing charity, Threshold has reiterated its call for an NCT-type certification system for private rented housing, whereby landlords would be obliged to prove compliance with minimum standards before they could rent their properties. The call follows last night’s (02.11.17) RTÉ Investigates programme, which highlighted appalling living conditions in rental properties across the country.

Commenting, Threshold chair, Dr Aideen Hayden said: “The current system, in which local authorities are responsible for the inspection of properties in the private rented sector, is not fit for purpose. Local authorities do not have the capacity to inspect and effectively enforce minimum standards. We are calling for a certification system to be put in place where the onus would be on landlords to prove their compliance with minimum standards. If a certificate does not exist, the penalty for renting should be severe so that there is no excuse for being outside the system. Inspections would then focus solely on whether the landlord held a certificate of compliance.”

“The present system relies on landlords being caught. But the prospect of being caught is slim. There is no fear of the consequences in the absence of regulations and proper inspections. The current reliance on the fire service to enforce fire safety standards is too much of a demand on overstretched frontline services.”

She added: “Often dangerous housing is occupied by the most disadvantaged and vulnerable in our society and this must be addressed. One of the greatest fire safety risks in private rented accommodation is overcrowding, which is not covered under current minimum standards laws. In 2016, the CSO report shows that close to one in every 10 people now live in accommodation with more people than rooms. This is a rise of 28 per cent since the 2011 Census.

“At the moment we are reliant on the provisions of the fire and safety regulations and planning law. This lack of clarity means some landlords are taking advantage of the housing shortage. Not only are renters being exploited financially but their lives are being put at risk. Threshold is urgently calling for emergency legislation to be put in place to introduce a legal definition of overcrowding.”

In 2016, substandard accommodation was one of Threshold’s top issues, with 1,432 cases nationally.

Dr Hayden added: “The RTE Investigates findings are in all probability the tip of the iceberg. Many of our clients who are living in substandard properties lack the basic necessities for a quality of living, such as adequate heating facilities, as well as hot and cold running water. Many people living in sub-standard private rented accommodation are too afraid to report it for fear of notice of termination or landlords doing substantial work and then increasing the rent. Either way the tenant suffers.”

Further details on minimum standards and Threshold’s call for an NCT-type certification system for private rented housing are available here.