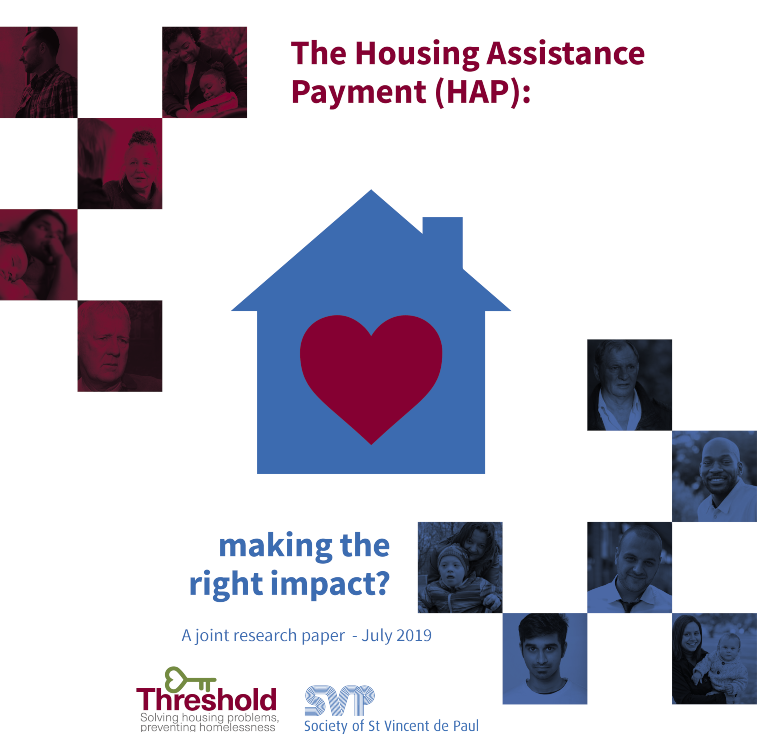 The gap between Housing Assistance Payments (HAP) and rents in the private rental sector is putting more families at risk of homelessness, according to a new survey from two charities involved in the sector.

While HAP is intended to help families secure a place to live, the reality is that HAP limits are insufficient to allow many on low incomes to secure, private rental accommodation, say the housing charity Threshold and the Society of St Vincent de Paul (SVP).

Recipients of HAP are allowed to top-up the payment, once the total rent they pay doesn’t exceed 30% of their net income. But this new survey, entitled ‘Housing Assistance Payment (HAP): Making the right impact?’ carried out jointly by the two charities has found that 20% of the tenants surveyed were paying more than the 30% limit, with 10% paying more than 40% of their net income on rent. The report is available here:

Almost half (45%) of those paying a top-up said that they were struggling with paying utility bills, buying groceries and covering childcare and school costs as a result.

Threshold CEO, John-Mark McCafferty, said that unsanctioned and unaffordable top-ups are increasing features of HAP. “This was a feature of the rent supplement payments system which HAP was designed to prevent”, he said.

Another major issue highlighted in the survey is the lack of controls over the standard of accommodation accessed by HAP tenants.

In 2017 only 4.5% of all private rented properties registered with the Residential Tenancies Board were inspected. Of these 79% failed to meet regulatory requirements. However only 4.5% of these were issued with notices and legal action was taken in only five cases. Of the 12,833 dwellings which failed to meet regulatory standards, no action was taken with regard to 12,321 of these dwellings.

“Our volunteers who visit families in private rented accommodation who are in receipt of HAP find that many tenants are living in substandard and possibly unsafe accommodation and are unable to persuade their landlord to improve the standard of their living conditions”, said Nessan Vaughan, chairperson of the SVP National Social Justice Committee.

The survey report contains many examples of the difficulties HAP tenants face, including the discrimination experienced by some vulnerable households trying to access housing in the Private Rental Sector (PRS), who must compete with other prospective tenants who may be seen as more desirable by landlords.

“It also found that HAP cannot provide people with a sense of security regarding their long-term accommodation need. HAP operates within the private rented sector which does not provide long term security of tenure.”

Threshold and SVP are calling for a complete review of HAP and its interaction with the PRS to determine the next steps for HAP given the changing landscape of housing and renting in Ireland.

“The charities also called for greater provision of social housing by the local authorities and AHBs. In addition, there is an urgent need for “real” affordable rental, whereby the rent reflects ability to pay as opposed to being indexed to market rents or purely to the cost of provision.”

Since its introduction in 2014, HAP has increased in size and at a pace, growing from 500 tenancies to almost 48,000 at the end of 2018. As part of its Rebuilding Ireland strategy the Government aims to bring that figure up to 83,760 HAP tenancies by 2021. The government plans to build just 33,437 homes in the same time period; homes which offer the security and affordability that we need.