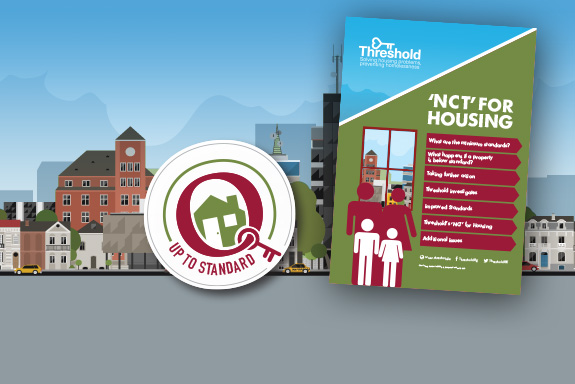 The national housing charity, Threshold has warned that Ireland’s housing crisis will not be solved by bringing back bedsit accommodation. Responding to a comment from Housing Minister Eoghan Murphy that he would consider bedsits as part of a review of the Rebuilding Ireland programme, Threshold chief executive, John-Mark McCafferty said this was not the answer.

He said: “It is worrying that almost a decade after the introduction of legislation to eliminate the bedsit, we are now hearing calls for their re-introduction as a response to the current accommodation shortage. Last year saw the publication of Rebuilding Ireland: An Action Plan on Housing and Homelessness. Are we now, as a society, so bereft of ideas that the best response we can come up with is to bring back the bedsit?”

Bedsits were eliminated in 2009, following the introduction of regulations to remove sub-standard accommodation where occupants had to share bathrooms and cooking facilities and, in some cases, to use outdoor toilets.

Mr McCafferty added: “The reality is that the bedsit was already in decline as a source of accommodation before the regulations were introduced. In the five-year period between the 2006 and 2011 censuses, the number of bedsits fell by 50 per cent, as tenants found better-quality accommodation elsewhere and landlords faced up to the fact that sub-standard bed-sits were not a viable housing option in the 21st Century. That 50 per cent reduction didn’t lead to any discernible increase in homelessness.”

However, substandard accommodation continues to be a significant issue in the private rented sector, which houses one in five families in Ireland. Of the 13,066 dwellings inspected in 2015, almost two-thirds (8,440) were found to be below standard.

Chairperson of Threshold, Dr Aideen Hayden said: “Threshold broadly welcomed the introduction of improved minimum standards on Saturday (01.07.17). Are we now, a matter of days later, seeing a U-turn in Government policy?

“The fact of the matter is that most bedsit-type accommodation fails to meet current standards because it doesn’t meet fire safety regulations.”

She added: “A recent fire in Mountjoy Square, Dublin, could have claimed many lives. It was discovered that 150 people were living in hopelessly unsuitable accommodation. Far from deciding to dumb down on standards, what we urgently need to see is their enforcement to make sure we never face a tragedy like Grenfell Tower in the UK.”

Threshold is reiterating its proposal for an NCT-type system, whereby landlords would be obliged to provide compliance with minimum standards in order to rent their properties.

Mr McCafferty added: “Local authorities don’t have the capacity to inspect and effectively enforce minimum standards, meaning the current system is not fit for purpose. We are again calling for a certification system to be put in place, whereby landlords would have to prove their compliance with minimum standards. With such a system, inspections would focus on whether a landlord held a certificate of compliance.”

Visit the Threshold website for further information on minimum standards and details of Threshold’s proposed NCT for private rented accommodation.

Threshold wishes to acknowledge funding received from the Scheme to Support National Organisations 2016-2019 and the Department of Housing, Planning, Community and Local Government.