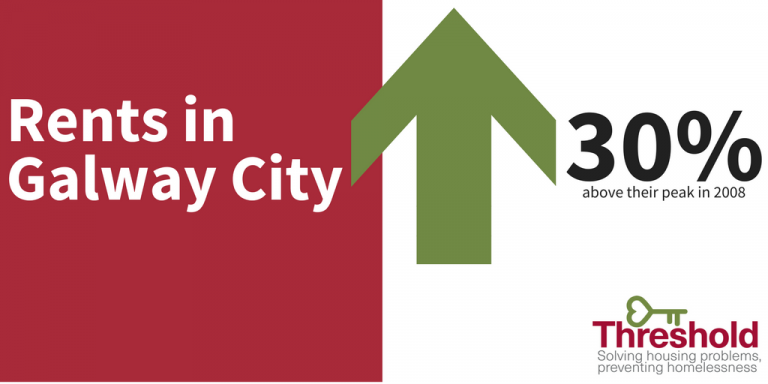 Commenting, Threshold Western Regional Services Manager, Diarmaid O’Sullivan said: “The figures in the latest Daft.ie Rental Report make for worrying reading.  Rents in Galway City are now 30 per cent above their peak in 2008 and for an increasing number of people, renting has simply become unaffordable.

“Galway was designated a Rent Pressure Zone in early 2017, but it is clear that it may take some time for these measures to moderate rent inflation in the city.  Continued policing of the legislation to prevent avoidance by landlords and a national rollout of the RPZs is needed urgently.”

The report shows that rents across Connacht and Ulster rose by an average of 9.2 per cent during 2017, one of the largest increases recorded since the start of 2007.  Galway has seen significantly larger rent increases than the national average, with increases of more than 65 per cent since 2010.

The figures are borne out by numbers from Threshold’s Galway Advice Service. During Q4 2017, 109 clients (out of 853 clients) approached Threshold in Galway for advice on how to deal with rent increase and rent reviews.  This issue was second only to tenancy terminations.

Threshold, chief executive John Mark McCafferty said:  “The private rented sector is no longer a viable option for many low income households, in particular those in receipt of housing supports such as HAP and Rent Supplement. This has worrying economic impacts when it comes to key workers who we rely on to provide the most vital services. We call on the Government to address this issue which is completely at odds with the stated government policy in the ‘Draft National Planning Framework – Ireland 2040, Our Plan’ to ensure sustainable communities.’