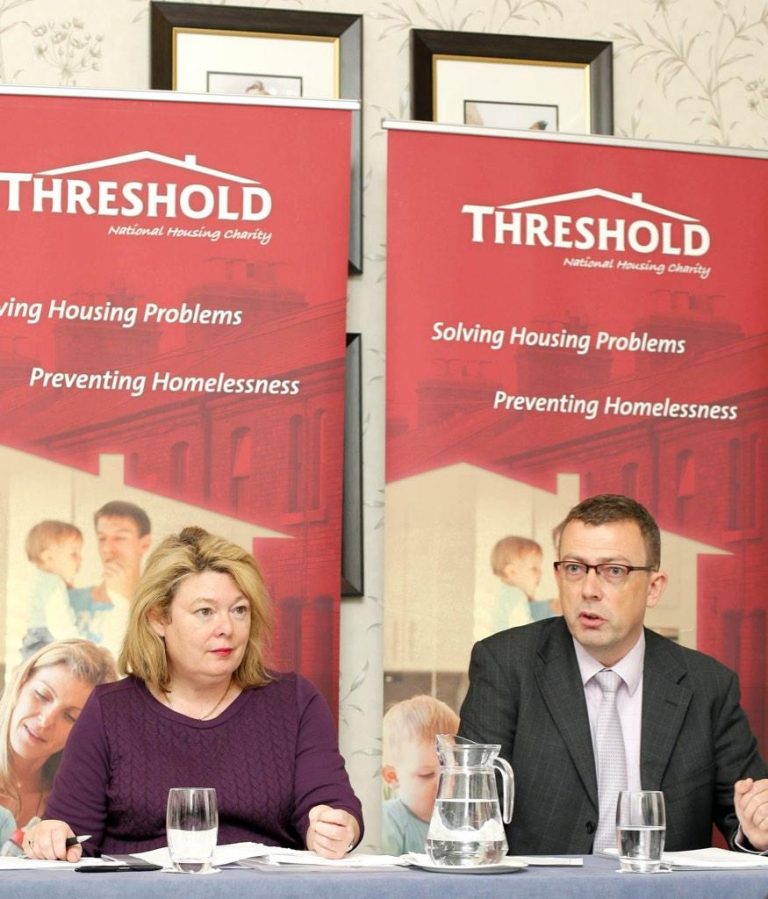 The Rent Supplement scheme must be overhauled to bring payments into line with real market rents and provide greater flexibility for families at risk of homelessness. That’s according to Threshold, the national housing charity, which today (10.10.14) launched its pre-Budget advisory on the scheme.

Speaking at the launch, Bob Jordan, Chief Executive of Threshold, said: “The Rent Supplement scheme is currently not fit for purpose.  Rent Supplement tenants face extreme difficulties in finding suitable accommodation they can afford. They must battle against discrimination, as many landlords tend to favour working tenants. And now, due to spiralling rents, many are currently struggling to hold on their homes.

“Sky-rocketing rents in the capital and other large urban centres have put Rent Supplement tenants at increased risk of homelessness. Across the country, the shrinking number of properties available to rent has contributed to increased rental costs, particularly in large urban centres, where demand is high.

“Market rents now far surpass the maximum limits for Rent Supplement set by the Department of Social Protection in many parts of the country. This makes it extremely difficult for Rent Supplement claimants to secure adequate accommodation and to remain in areas where they have settled. It has also resulted in increased levels of homelessness.”

According to the advisory report published by Threshold today, the practice of ‘topping up’ – whereby tenants in receipt of Rent Supplement pay an under-the-counter payment to their landlord in addition to the officially declared rent – is widespread.

Threshold has conducted a number of surveys of its clients in recent years, all of which showed high proportions of Rent Supplement tenants being forced to pay top-ups on their rent. For its most recent survey – in May of this year – Threshold surveyed 133 clients in receipt of Rent Supplement, and found 44 per cent were being forced to make ‘top-up’ payments to their landlords to meet the costs of their rent.

Commenting on the survey, Senator Aideen Hayden, Chairperson of Threshold, said: “Despite the fact that making such payments can put tenants under significant financial strain, in order to secure a place to live, many Rent Supplement recipients are left with no choice but to pay a top-up to their landlord.

“In our survey, all of those paying top-ups said it affected their spending in other areas, including food, heating and clothing. Thirty-four per cent of respondents who were paying a top-up said that it had resulted in them falling into rent arrears.

“At Threshold, we knew this practice had become increasingly widespread over the past 18 months. However, rents have now risen to such an extent that – for some people – even with top-up payments, their Rent Supplement payments are simply not high enough to allow them to remain in their homes.

“The shocking results of our survey are yet another indication that the Rent Supplement scheme is not fit for purpose. It is also firm evidence that more needs to be done to limit the rate of rent increases.”

In the advisory report it published today, Threshold is calling on the Government to include a range of measures in Budget 2015 to improve how the Rent Supplement scheme operates. The charity’s recommendations include:

“Increased Rent Supplement levels need to be introduced in Budget 2015 as part of a wider package of reforms aimed at ensuring rent certainty for all low-income households,” said Bob Jordan. “In areas where housing supply is limited, a small adjustment in Rent Supplement payments of between €25 and €50 euro a week can keep families in their homes and prevent homelessness.

“The Government must use the opportunity presented by next week’s Budget to overhaul the flawed Rent Supplement system, increase housing supply and achieve long-term certainty for tenants by regulating the size of rent increases that can be sought by landlords.”

In recent months, Threshold has been running a campaign calling on the Government to increase Rent Supplement limits to bring them into line with real market rents and to protect people who are at risk of homelessness.  Further information about the campaign and the advisory published today are available on the organisation’s website, www.threshold.ie.