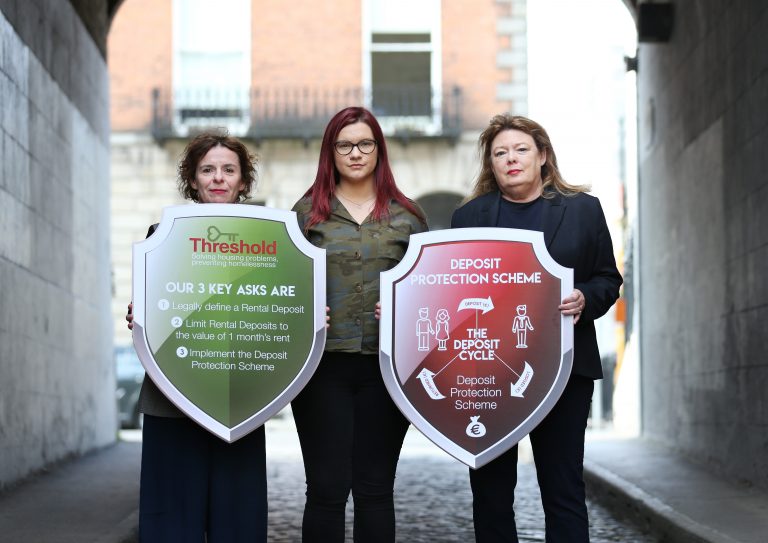 Monday 19th August 2019: National Housing Charity Threshold and the Union of Students in Ireland (USI) have today called for the government to implement immediately a Deposit Protection Scheme to safeguard rental deposits and protect tenants in the private rented sector against potential scams.

“This scheme has been promised for several years,” said the Chairperson of Threshold Aideen Hayden. “The government initially committed to addressing the illegal retention of deposits by landlords in its 2011 programme for government and successive Ministers for Housing have agreed to its introduction. In 2017 the Minister again said that it would be established and would be operated by the Residential Tenancies Board. ‘We won’t be waiting until 2019 for the RTB to take on these enhanced roles,’ he said.”

Such a scheme was originally legislated for under the Residential Tenancies (Amendment) Act 2015.

Ms. Hayden said: “We ask the government to honour its commitment to re-examining the laws around rental deposits, which urgently need to be strengthened in order to increase protection for tenants in the private rented sector. There are vulnerable people in tenancies all over the country who are on the margins of homelessness and simply cannot afford to lose their deposits. The lack of a scheme to safeguard deposits has led people to resort to moneylenders in order to fund the deposits for their new rental properties. We are calling on the government to do three things: to establish a legal definition of rental deposits; to limit rental deposits to the value of one month’s rent; and to implement a Deposit Protection Scheme, which would see deposits lodged with an independent third party such as the Residential Tenancies Board.

“By law, a deposit belongs to the tenant unless the landlord establishes a right to it,” Ms. Hayden continued. “The RTB’s Annual Report for 2018 revealed that in the case of four out of five of the disputes it saw relating to rental deposits, the deposit in question was either fully or partially awarded to the tenant upon conclusion of the case. Threshold is aware that in many cases, landlords who create difficulties for tenants in other areas are more likely to attempt to illegally retain deposits. A Deposit Protection Scheme, in which deposits would be guarded by an independent third party, would inevitably lead to less of these kinds of disputes. Moreover, the RTB adjudication process in its current form is very lengthy and is not fit for purpose. The scheme we are proposing would be seamless and more responsive to the immediate needs of individuals.”

Karina Timothy, Galway Regional Services Manager with Threshold added: “The issue of illegal deposit retention is not a phenomenon confined to Dublin, but affects tenancies across the country. Given that a Deposit Protection Scheme is already legislated for, we would urge the government to take action in implementing it as soon as possible. Threshold began campaigning for the scheme to be put in place over a decade ago, because we saw first-hand that the loss of a deposit carries a high human cost and can pose a real risk of homelessness to tenants. The scheme would strengthen our private rented sector and bring Ireland in line with international best practice, as such schemes are currently in place in Northern Ireland, England, Wales, Scotland, New Zealand and Australia.”

Lorna Fitzpatrick, President of the Union of Students in Ireland said: “Due to a shortage of student accommodation many third-level students are relying on the private rented sector for a place to live while attending college. These students are already struggling to afford their college fees and rent, particularly those reliant on SUSI maintenance grants, and they are a group that is especially vulnerable to fraud and scams. A Deposit Protection Scheme would minimise their exposure to rental fraud and would also be of benefit to international students who may have to return to their home country without securing a return of their deposit.”

Disputes related to rental deposits are one of the issues on which Threshold advises clients daily. One such case concerned a one-parent family – Alison, living with her daughter, was working full-time and in receipt of Housing Assistance Payment (HAP). At the beginning of her tenancy Alison paid €1,400 as a deposit after receiving financial support from her family.

After Alison was presented with a notice of termination, her landlord refused to return her deposit in full. With little notice given, Alison struggled to fund a deposit for a new rented property and was forced to move with her daughter to her family home, and share a bedroom with her daughter and sister. Threshold intervened by engaging with the landlord on Alison’s behalf and Alison was eventually advised to submit a case to the RTB for deposit retention. After nine months the landlord still had not returned any part of Alison’s deposit. The RTB eventually ruled in favour of Alison and the landlord was instructed to return the majority of her deposit to her.

“Cases such as this highlight the urgent need for a more efficient system to be put in place,” Ms. Hayden said. “Despite the fact that the case was successful in the end, our client was left without the money that was owed to her for a period of nine months. It cannot be taken for granted that people should rely on their families to raise this kind of money in the interim. Deposits need to be returned promptly at the end of a tenancy.”

Threshold has three key asks for government with regard to rental deposits:

Limit rental deposits to the value of one month’s rent

There are currently no legal guidelines as to how much a landlord may request as a deposit. Threshold is aware of the practice of landlords seeking deposits to the value of two or more months’ rent, along with the payment of the first month’s rent, from new tenants. This situation could see a tenant paying over €4,000 as a deposit in Dublin or over €2,500 in Cork.

This cost is out of reach for many, meaning that they cannot compete for housing, or they enter into debt or their bills go unpaid in order to secure accommodation. Additionally, a deposit will often represent the full extent of an individual or family’s savings, and the failure of a landlord to return a deposit can create significant financial hardship and distress.

A Deposit Protection Scheme would see tenants’ rental deposits lodged with an independent third party such as the RTB, and returned to the tenant directly by this third party. In this case it is guaranteed that the deposit will be returned to the tenant as long as they have met the terms of their tenancy agreement. This means the deposit will be safe even in exceptional circumstances like when a landlord or letting agent goes out of business.