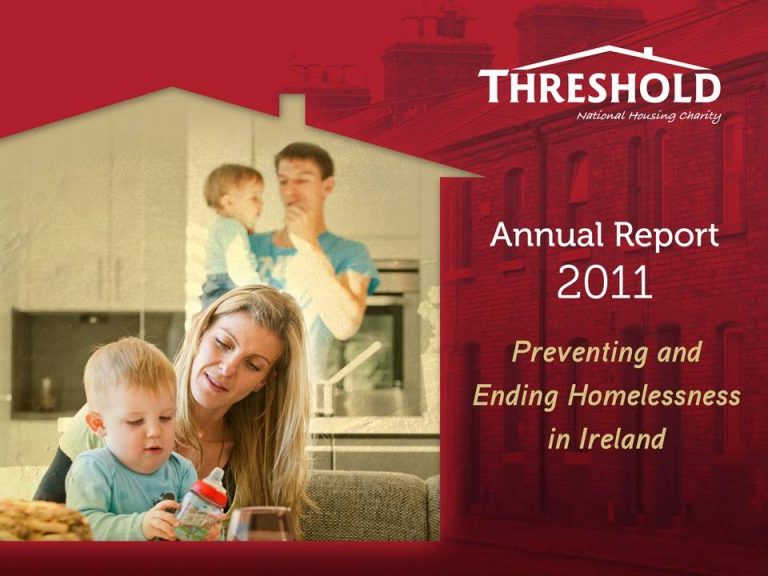 An expanding rental sector, illegal deposit retention and impact of repossessions key issues –These are some of the issues facing the private rented sector, which now provides long-term housing for a significant portion of our population and stronger regulation is needed to protect the growing number of households living in the sector. That’s according to the housing charity, Threshold, which launches its annual report for 2011 today (15.11.12).

The report shows that over 23,000 people contacted Threshold for assistance last year. According to the report, the past five years have seen many households turn their back on home ownership – either by necessity or by choice – in favour of renting. As a result, rents are rising in urban areas, as the employed and unemployed compete for the limited pool of rented properties. This has left first-time renters and vulnerable tenants susceptible to rogue landlords, who can refuse to return deposits, fail to maintain properties, and insist on illegal top-up payments from rent supplement tenants.

Speaking at the report launch, Senator Aideen Hayden, Chairperson of Threshold, said: “The 2011 Census showed the private rented sector has grown by 50 per cent in just five years – to the extent that it is now back to the size it was during the 1950s. Almost one in five households now live in private rented accommodation, and this figure will continue to grow for some time to come.

The growth in this sector has been rapid, and will have long-term repercussions for Irish life.”According to Threshold, the growth of the private rented sector is due to a combination of factors, including difficulties in accessing local authority housing; fewer people being able to afford to buy a home; and mortgage credit being in short supply. Home ownership has fallen back to 1970s levels, the Threshold report states, and local authority construction has virtually ceased.

Half of those who contacted Threshold last year were living in their rented accommodation for between six months and four years, with one in 10 in their tenancies for over four years. “The fact that more people are renting on a long-term basis has major implications for the regulatory and policymaking environments,” said Senator Hayden. “For a start, we need to ensure renters are guaranteed security of tenure, and don’t find themselves in situations where they are arbitrarily forced to leave their homes. “At present, tenants who are fully paid-up with their rent can still face the grim prospect of being forced out of their home. This may happen because a bank decides to repossess a property where the landlord is in mortgage arrears. Or it may be because of the Department of Social Protection’s decision to cut rent supplement levels. Or because the landlord decides that they could get more profitable tenants in. “These situations can lead to hardship for the tenants concerned and, for the most vulnerable tenants at the lower end of the market, they have the potential to lead to homelessness. Indeed, one of the consequences of the growth in the rental sector is that those who have always been at the lower end of the rental market – the ‘working poor’ and people who are dependent on social welfare – are now finding it more difficult to source suitable accommodation.

As demand for rental properties soars, rents increase and those on lower incomes are completely squeezed. If the private rented sector is to offer secure homes to hundreds of thousands of families on a long-term basis, then the underlying problems that create difficulties for tenants must be addressed.” Illegal Deposit Retention and the Need for a Deposit Protection SchemeThe main difficulty encountered by Threshold’s clients during 2011 was the illegal retention of tenants’ deposits by landlords.

The charity dealt with 3,259 queries in relation to this issue, and estimates that up to €2 million worth of deposits were at stake in claims brought by tenants to Threshold. “Deposit retention has become one of the greatest barriers to the smooth operation of the private rented sector,” said Bob Jordan, Director of Threshold. “While landlords are entitled to keep deposits in certain circumstances, almost 80 per cent of deposit disputes that go before the Private Residential Tenancies Board result in some or all of the money being returned to the tenant, proving that most landlord claims are not legitimate. “This matter of unlawfully retained deposits will only be resolved when deposits are no longer held directly by the landlords. Deposit protection schemes, where the deposit is held by an independent third party, have been successfully introduced in England, Scotland and Wales. Threshold hopes to see a similar scheme implemented in Ireland, and we welcome the Government’s commitment to doing so. The Residential Tenancies (Amendment) Bill is being discussed in the Dáil today, and we are hopeful it will lead to the early establishment of a deposit protection scheme. Such a scheme is more necessary than ever before, as the rental sector continues to grow.

” Repossessions and Rent Receivers: Tenants Caught in the Crossfire at today’s launch, Threshold also highlighted how tenants are being adversely affected by the crisis in the buy-to-let market, and the difficulties they encounter when their landlords get into mortgage arrears. “We are concerned that tenants are being caught in the crossfire between landlords and financial institutions when disputes arise over mortgage arrears,” said Bob Jordan. “A worrying new phenomenon is the appointment of rent receivers by lending institutions – to bypass landlords and collect the rent directly from tenants. In the past 12 months, we have dealt with an increasing number of cases where tenants have been threatened with eviction by both their landlord and a rent receiver if they do not hand over the rent to either party. This places the tenant in an impossible position. “Threshold’s experience is that financial institutions sometimes ignore the rights of tenants in their pursuit of the landlord’s assets. Some tenants are not being given proper notice when their home is being repossessed by the landlord’s lending institutions; in other cases, tenants have experienced difficulties in getting their deposits returned from receivers.

The State needs to step in and provide legal protection to tenants who – through no fault of their own – are caught in this position.”Preventing Homelessness Threshold’s annual report also demonstrates the role of the private rented sector in tackling homelessness.

The charity’s Access Housing Unit – which sources private rented accommodation for people who are homeless – assisted 177 homeless people into housing last year, and has housed over 700 people since 2003, when the service began.“Threshold has pioneered the use of the private rented sector as an accessible route to helping homeless people back into housing,” said Bob Jordan. “We source good-quality properties from private landlords, and we provide tenants with the supports they need to live independently. This helps single people, in particular, who have limited access to traditional local authority housing. Our statistics prove that our approach works: 96 per cent of those housed with Threshold’s help have not returned to homelessness. “Furthermore, our approach offers strong value for money: our priority in advising all clients is to minimise the risk of homelessness and the need for recourse to formal legal processes such as the Private Residential Tenancies Board. It costs €24 per hour to employ a Threshold advisor, compared with approximately €5,000 for a PRTB tribunal hearing or €16,000 to keep someone in emergency homeless accommodation for a year.”

Other issues highlighted in Threshold’s annual report include:

•The impact of rent supplement cuts, including top-up payments to landlords.