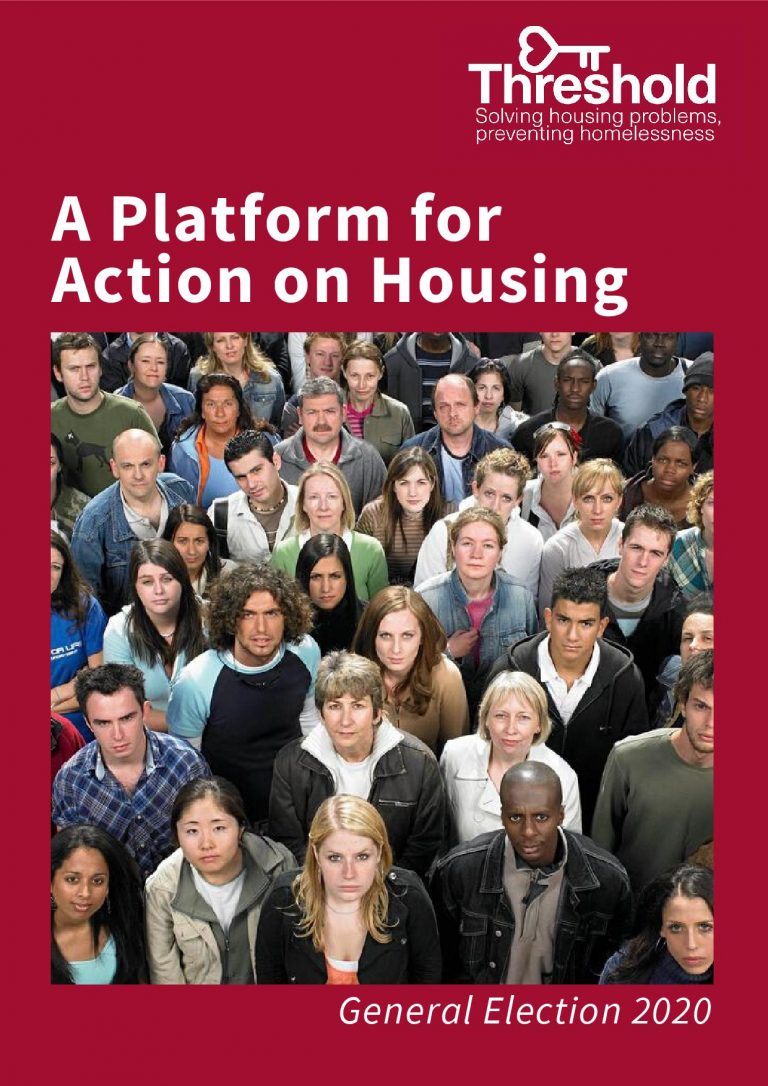 National housing charity Threshold has called on election candidates to commit urgently to measures to reform the private rented sector and help ease the housing crisis.

Threshold’s election manifesto, A Platform for Action on Housing, contains asks for all election candidates with five key aims: improving the viability of the private rented sector; preventing homelessness; increasing the supply of homes; establishing a 20-year housing strategy; and enshrining the right to a home in the Constitution.

Speaking today, CEO of Threshold John-Mark McCafferty said: “Last year, Threshold’s advisors carried out over 80,000 actions on behalf of vulnerable households to support them and prevent homelessness. The measures we are asking candidates to support in the 2020 General Election are based on the lived experience of the clients we support every day.”

Improving the viability of the private rented sector

“Many positive changes have been made towards transforming the private rented sector into a viable tenure of choice,” says McCafferty, “but there are still some areas that require improvement. They require political will.  The position taken on these issues by those who are elected to the new Dáil will have a major impact on the lives of hundreds of thousands of tenants, and on those experiencing or at risk of homelessness.”

The changes Threshold is seeking are:

“While homeless prevention strategies have traditionally focused on personal and social challenges such as addiction or mental health, or on specific vulnerable groups such as care leavers, for the majority of people, homelessness occurs on foot of a notice of termination from their private rented home,” McCafferty states. “The evidence indicates that tenancy protection measures in the private rented sector prior to homelessness occurring need strengthening.”

Increasing the supply of homes

Threshold is asking for a commitment to increase all housing stock owned and managed by the Local Authorities and Approved Housing Bodies to 20% by 2033 and 25% by 2040. This figure currently rests at 9%.

“This measure will bring stability and certainty to the housing market,” says Hayden. “As approximately one third of the population require assistance to meet their housing need on an ongoing basis, it will also ensure that the housing need of this group of people is met.

“State-supported housing must expand beyond traditional social housing to a public housing model including, for example, cost-rental and affordable purchase-style schemes. In addition, more intermediate tenures should be developed and delivered upon, such as shared ownership and affordable rental. There is also a need for greater access to home ownership for lower-income households.”

Threshold is seeking a 20-year housing strategy to stretch beyond the lifetime of any one government. This will require the establishment of a Commission on the Future of Housing in Ireland.

“We need a housing system that works for all people,” says Hayden. “This requires time, commitment and a consistent, integrated approach. Housing strategies that only last the lifetime of one government are insufficient and keep us in a highly problematic boom-bust cycle of housing provision.”

The right to a home

Threshold’s Platform for Action on Housing is available here