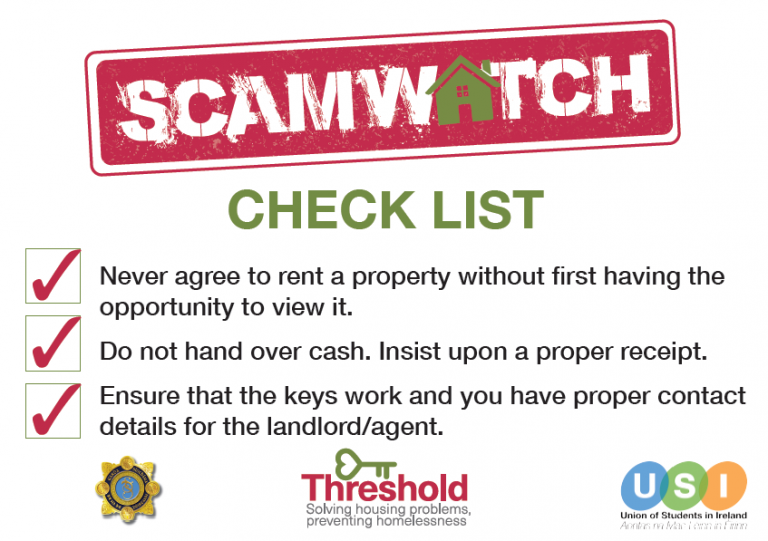 The national housing charity Threshold, along with An Garda Síochána and UCC Student’s Union, has today (23.05.19) launched an awareness campaign to help people avoid being duped when seeking rented accommodation.

The campaign, called ‘Scamwatch’, offers a checklist for would-be tenants to help them to avoid falling victim to a rental scam.

The campaign follows a series of incidents reported to Threshold in which students, largely from overseas, have been victims of rental fraud.

Commenting, Southern Regional Services Manager of Threshold, Edel Conlon said: “We have recently dealt with a number of cases of students, primarily from overseas, who have been victims of rental fraud. In two recent cases, students from Brazil were duped into paying €1,750 in rent for a non-existent tenancy.

“We strongly advise people to be cautious of a landlord who claims to be out of the country, can’t show you the property but requests a deposit anyway. Would-be renters should also be mindful that in some instances a scammer could be living at the property and showing a number of people around, getting a deposit from several people and then disappearing with the money. In other instances, the transaction appears normal until the renter finds that the keys don’t work and the ‘landlord’ has disappeared. People need to establish that the house exists, that it is available for rent, the identity of the landlord /agent and that the person advertising the property is authorised to rent it out.

“Our advice to anyone looking for accommodation is to resist the urge to accept the first place they see. Our Scamwatch checklist is a resource for students and indeed anyone looking to rent in the private rented sector, to advise them on what to look out for in securing suitable accommodation and the steps to take to protect themselves from scams.”

She said that anyone can fall victim to a scam.  “Anyone who finds themselves in this situation should report it to Threshold, as well as to An Garda Síochána. While Threshold cannot help to recover the lost money, alerting us will help to prevent other people from falling victim.”

She called on the Government to introduce the Deposit Protection Scheme urgently.  This scheme was approved in December 2015.  Under it, deposits would be held securely by an independent body, thus offering immediate protection to all tenants.

“We are also calling for a ceiling of one month’s rent to be placed on all deposits. This would act as an additional security measure against landlords who demand deposits equivalent to several months’ rent.”

Deputy President of UCC Students’ Union, Kelly Coyle said: “Availability and affordability of suitable accommodation is a huge issue for students and many are finding themselves priced out of higher education because of the rental crisis. It is shocking that many people find themselves at risk of falling victim to scams. It is an issue that USI has been working hard to address and we are delighted to have the expertise of an organisation like Threshold to guide students through the rental process where difficulties arise. We would urge any student looking for accommodation to check out Threshold’s Scamwatch tips before they commit to a property.”

Sgt. Stewart Philpott from the Gardaí Community Engagement in Cork said he was delighted to be lending support to Threshold’s Scamwatch awareness campaign. “We have advice for members of the public on how to spot a scam and internet fraud and we encourage anyone who comes across a suspicious listing to report it to An Garda Síochána. We are delighted to support Threshold in this campaign and we will also carry its advice for students on www.garda.ie.”

The Scamwatch checklist can be downloaded at https://www.threshold.ie/advice/seeking-private-rented-accommodation/be-careful-of-rent-scams/